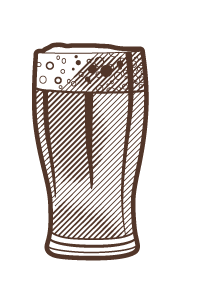 The Stone Fence holds a special place in American history. It’s often associated with patriot, scholar, soldier and politician Ethan Allan. Born in rural Connecticut, Allen grew up wild, but educated. He led a group called The Green Mountain Boys who terrorized and destroyed the property of settlers coming into his territory from New York. When the Revolutionary War broke out, he and his men basically shrugged, stopped harassing settlers and unleashed their crazy frontier guerrilla tactics on the British. It was like they were finally called up to the majors, and they leapt at the opportunity.

As the story goes, one night Allen and his men decided to take Fort Ticonderoga from the British. They weren’t under orders, they just decided that maybe the British shouldn’t have it. Fort Ticonderoga was strategically important to the British as a hub for supplies and communication, and although it was lightly garrisoned, it was also bristling with cannons. Naturally, Allen and his men (who had no cannons) determined that this feat would require a night of heavy drinking to prepare. Their drink-of-choice was known as The Stone Fence (too many of them and you’ll stare blankly ahead, sitting heavily like a stone fence). Back then, it was a potent mix of New England rum and hard cider. With the courage that comes only from a night of hard drinking, Allen and his men caught the British completely by surprise early the following morning, and Allen demanded that they surrender the fort “in the name of Great Jehovah and the Continental Congress.” In the face of these rowdy, drunk colonials, the British wisely surrendered.

So why are we featuring this rum cocktail? Because acclaimed 19th century bartender Jerry Thomas decided in 1862 that it should be a bourbon drink and included it in his book as such. Never mind that bourbon didn’t actually exist during the Revolutionary War. But we don’t mind. Thomas’s recipe is delicious, and perfect for the fall.