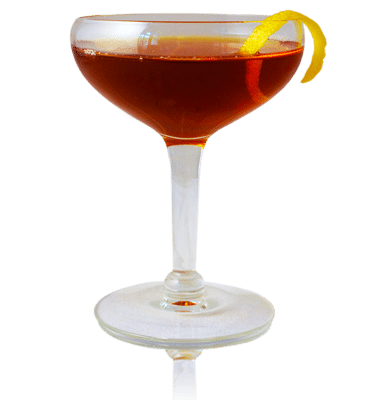 Pour the ingredients in a mixing glass filled with ice and stir well. Strain into a chilled cocktail glass and garnish with a lemon twist.

Once upon a time, Saratoga Springs New York was the 19th century’s east coast equivalent of Las Vegas. The wealthy were free to while away their hours gambling, carousing or relaxing with spa treatments. In the golden age of resort towns, Saratoga Springs was one of the first. In the early 1800s, Gideon Putnam decided to build a European-style spa centered around the springs. The springs provided a popular initial draw for tourists, as visitors could bath in the waters and enjoy their curative benefits. Naturally, it only made sense to add gambling and alcohol.

In 1864, John Morrissey brought gambling to town. Having made a fortune in New York, (and a lifelong enemy of Bowery Boy “Bill the Butcher”) Morrissey had a knack for spotting an opportunity. The rolling countryside of the Hudson Valley proved to be fertile ground for his casinos and the nightlife that came with them. While there were a couple of cocktails by the name of Saratoga, one recipe has endured throughout the years.

Anti-gambling laws shuttered the casinos in the early 20th century, and an overall shift in the American lifestyle greatly diminished the popularity of resort towns. Today, Saratoga Springs might not be the same resort destination that it once was, but you can enjoy a cocktail that was once popular over a century ago. The Saratoga Cocktail is a living legacy from a time when the most popular American vacation involved relaxing, gambling and drinking, so it should be a natural fit these days. It’s a wonderful drink for any occasion, but in the spirit of its history, we hope you sit back and sip your Saratoga leisurely.