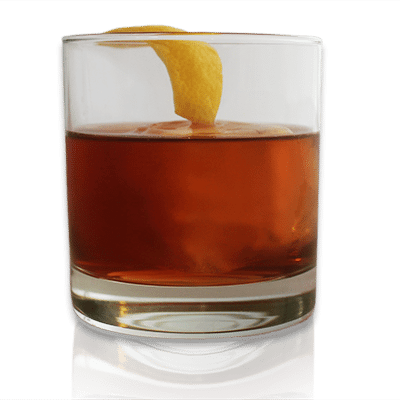 Shake ingredients with ice, then strain into a plain glass—devoid of any ornamentation. Squeeze a lemon peel over it and then garnish with the peel. Enjoy.

Cocktails can vary wildly from elaborately muddled affairs to relatively simple concoctions with only three ingredients. But once upon a time, people were accustomed to a more standardized drink. The time was the late-1800s, and the beverage was the Plain Whiskey Cocktail. This recipe was once so pervasive that it also served as the Plain Gin Cocktail and the Plain Brandy Cocktail. But the emphasis was on plain—nothing fancy to see here.

Even celebrated bartender Jerry Thomas, writer of “Bar-Tender’s Guide” in 1862—also known as “How to Mix Drinks or the Bon-Vivant’s Companion”—was a little nervous about making the Plain Whiskey Cocktail too complicated. In the gin and brandy versions of the drink, he included one or two dashes of Curacao, an orange liqueur. Not so for the whiskey variation. Here’s his classic recipe.1

(USE SMALL BAR-GLASS.)
3 OR 4 DASHES OF GUM SYRUP (This is basically a sweetener)
2 DASHES OF BITTERS
1 WINE-GLASS OF WHISKEY

Now you may look at that recipe and think, “That sounds suspiciously like an Old Fashioned.” And you’re probably right. This is, most likely, the cocktail that the “Old Fashioned” is referencing. Even the orange—typically used to garnish a contemporary Old Fashioned—is a throwback to the Curacao that Thomas left out of his Plain Whiskey Cocktail. Now granted, orange peel eventually found its way back into the mix in the early 20th century, and it’s why some bartenders still insist on muddling fruit. But if you’d like to recreate the classic Plain Whiskey Cocktail at home, we recommend this recipe.2