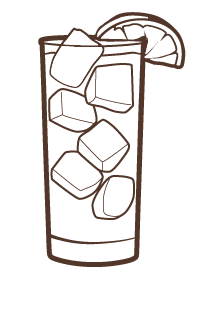 Squeeze the lime half into a tall highball glass and drop the rind into the glass. Add ice and whiskey and top it off with soda. Stir well and enjoy.

The Joe Rickey was once a popular bourbon cocktail named after Colonel Joe Rickey, who was one of history’s magnificent losers. To start with, he served as an officer in the Confederate Army. But no one ever talks about that, or the fact that he spent the rest of his life working as a lobbyist and a political fixer. Because everything he worked on would eventually be overshadowed by a bourbon cocktail that he wasn’t even particularly fond of. In his obituary, the cocktail is literally the second thing the newspaper mentions. And if that weren’t bad enough, everyone went ahead and replaced the bourbon with gin—which he definitely wouldn’t have approved of. You may have heard of a Gin Rickey, but you’ve probably never heard of Joe.1

There are numerous colorful stories about the origins of this drink—all of which are probably false—because we have something rare in the world of cocktail history: definitive proof from the man himself. He actually addressed the issue in a newspaper interview for an Ohio paper in 1900. Take it away, Joe!

“The ‘rickey’ originated in Washington, and I was in a sense responsible for it. You see, it was like this: I never drank whisky neat – it’s a mighty injurious system – but whisky diluted with a little water won’t hurt anybody. Of course, a carbonated water makes it brighter and more palatable, and for that reason I always took a long drink, usually whisky and water with a lump of ice.

“This is the highball of common commerce, and has been known to thirsty humanity for many generations. To this, however, I added the juice of a lemon in my desire to get a healthful drink, for the lemon acid is highly beneficial and tones up the stomach wonderfully.”

“This combination became very popular at Shoomaker’s in Washington, where I did most of my drinking, and gradually the folks began asking for those drinks that Rickey drinks. About this time the use of limes became fairly common, and one afternoon an experimenter tried the effect of lime juice instead of lemon juice in the drink, and from that time on all ‘rickey’ were made from limes. I never drink the lime juice combination myself because I think the lemon acid is mellower and more beneficial.”2

So there you have it—history’s total disregard for Joe Rickey’s preferences. People couldn’t even be persuaded to try lemon juice instead of lime. Really though, it’s a delicious drink either way, and we recommend trying one today.