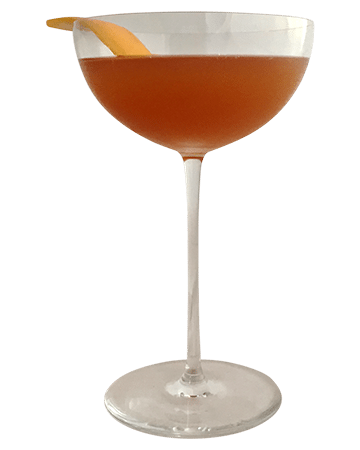 History is often a little murky regarding the origins of many classic cocktails. In no case is this more evident than the Brown Derby. Sorry, or is that the De Rigueur? Depending on which coast you’re on, the answer is “Sure.” The problem is that they’re identical cocktails that emerged around roughly the same time. The De Rigueur appears to have the edge, appearing in print first.

Here’s what we know for sure. In Judge Jr.’s 1927 cocktail book Here’s How, a Scotch-based version was listed with this colorful description: “Hark, ye lads! Here’s the very latest drink! Three of these will knock you for a row of aspirins.” (We wish bartenders occasionally talked like that today). A bourbon-based version of the drink next appeared in New York’s Savoy Cocktail Book, credited to Harry Craddock and published in 1930—same recipe, different whiskey. The Savoy was a very popular bar for celebrities, particularly Douglass Fairbanks and Mary Pickford, both of whom had drinks named after them in that same cocktail book. It’s entirely plausible that either of them, or really any other movie star, could have brought the drink back to Hollywood.

Enter The Brown Derby (aka when things start to get confusing). The Brown Derby was an iconic chain of restaurants, originally based in Los Angeles, that catered to the stars during the Golden Age of Hollywood. It would be reasonable to assume that a movie star might visit The Brown Derby and order the De Rigueur often enough that the establishment would decide to rebrand the cocktail as their own. Makes sense, right? That’s not the case here. For whatever reason, credit for the Brown Derby cocktail goes to The Brown Derby restaurant’s biggest competitor—an establishment called The Vendome Club. Normally, we’d be willing to speculate, but honestly, we’re stumped as to how this all came to be. While the De Rigueur was clearly first, the name “The Brown Derby” endured. And if you’ve ever tasted one, there’s no mystery as to why. No matter what your preferred nomenclature is, we recommend trying one immediately.