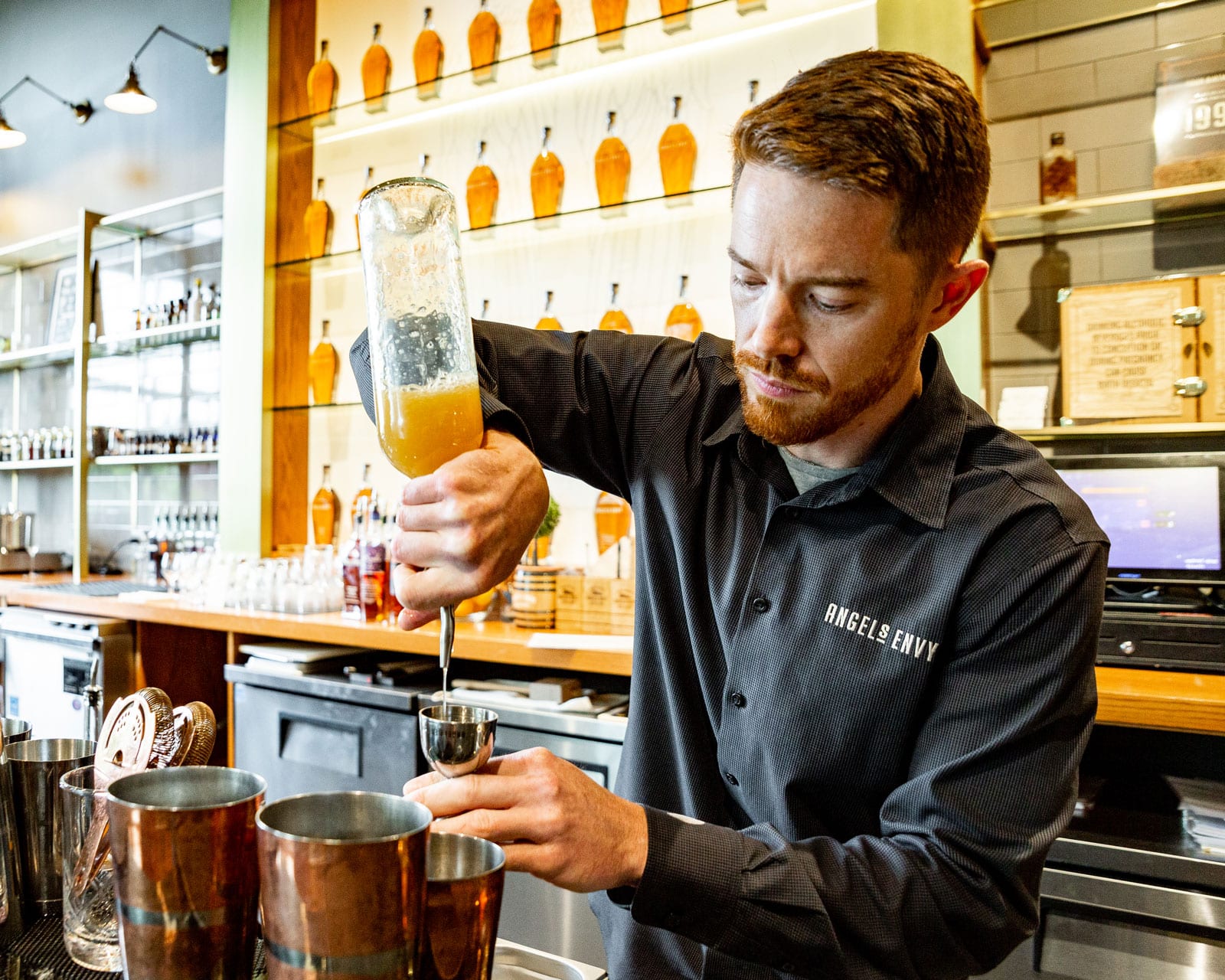 When you walk into our Finishing Room Bar after your tour, you’ll probably notice a pleasant, well-ordered sense of calm to the space. Everything is sparkling, stocked and ready for the next group of guests—every time. Much of this polish can be attributed directly to the individual we’ve chosen to manage our already exceptional team. Mike Bohn is the Bar Manager of the Angel’s Envy Distillery Finishing Room Bar, and he has always challenged himself and his team to learn and grow professionally. During his career, he has managed to work at a collection of truly exceptional bars and restaurants across the country.

He grew up near Dallas, Texas, and got his start in the service industry at the age of 20 working in the bars and restaurants of Austin while attending college. Eventually, Mike moved to New York City, where he would spend the next eight years developing his knowledge and skills behind the bar. “My first job was at a little Park Slope tavern that’s now closed. Soon after, I helped open a whiskey bar with a former co-worker, and I worked there as the assistant manager and bartender. My next project was opening a super swanky and palatial hotel bar and restaurant. That particular gig really showed me what it’s like to bartend for people with significant money—including the occasional mobster. I worked at Analogue after that, and then I began consulting with a group called Bar Theory.”

“My last project in New York was Olmsted, which is a James Beard award finalist and was recognized by Michelin’s Bib Gourmand. It was an opportunity for a lot of learning, just constant growth really. I walked in while the restaurant was still under construction and basically told them I was going to run their bar program, and they let me. I’d never worked so closely with a group of service staff who all really cared about the place and worked really hard, and it was all driven by Chef Greg Baxtrom. It was a truly unique experience, as I had the opportunity to work with a farmer who was foraging ingredients for me in upstate New York, all while working alongside some very talented bartenders and cooks day–to–day. It was intense, with a whole lot of learning in a very short amount of time, but it was an incredibly rewarding experience.”

So what brought Mike to Louisville? “I found myself in a transition point, personally, and one of my really good friends let me know that the Angel’s Envy distillery was hiring a bar manager. At that point, I was looking for a change, and it seemed like a fresh move, as well as a chance to build a program the way that I wanted. It also seemed like an excellent opportunity to learn another side of the business that I’d never experienced before. Personally and professionally, this was just a chance that I couldn’t pass up.”

When we asked what he likes about Louisville, he just laughed and said, “It reminds me of Austin 15 or 20 years ago, before Austin became California. Louisville still has a lot of quirk to it, as well as a lot of people who are fiercely loyal to the city, and a lot of parts of town that haven’t turned into condo developments with the first floor retail space yet. Everybody knows it’s going to get bigger, but everyone is also really holding on to the traditions and working to preserve the stuff that matters. And one of the things that really struck me, even when I was interviewing, was how nice everyone was.”

What has your experience been like at Angel’s Envy? “I’ve been amazed at the pride people have who work for this brand. It’s genuine, fierce loyalty, and people really love their jobs. I’m proud of my staff, and I love helping them find the tools to grow and improve their talents. I’m not giving them the answers, I’m letting them fail so they can figure out how to improve or make something work on their own. It’s been incredibly rewarding being here.”

How has the bar program evolved under your direction? “When I took over, there hadn’t been a manager for about six months, so I had a lot of work to do figuring out the systems and financials. When I started, our menu had four drinks. Now our seasonal menus feature ten cocktails with thematic elements. It was a challenge for our staff, doubling the menu size, but they pulled it off and got rave reviews. In addition to including seasonal elements to the menus, we’re also consistently adding new techniques and tools to our repertoire. Alex Staub is currently working on his own bitters class, and I’ve been proud to support him in that. I would love for my team to max out their potential here and move on to really well–known cocktail bars and be successful. I want them to have the tools and confidence to get there. There’s really no limit on what we can do here at Angel’s Envy, and it’s a really beautiful thing about working here.”